Thanks for making me want to take my dog out in public again!

Marlene contacted us for help with her two dogs, but primarily with Moxxie her 3 year old King Charles Cavalier Spaniel mix. Moxxie was dealing with some intense anxiety, which was causing her to bark excessively (all the time), and generally be all over the place anytime her environment changed. It got to the point that Marlene couldn’t walk her, and Moxxie was causing stress in the home because of her behaviour. We worked on teaching Moxxie how to calm down, giving her rules and structure, and helping her become more confident even in stressful situations. Check out what Marlene had to say after our last session! 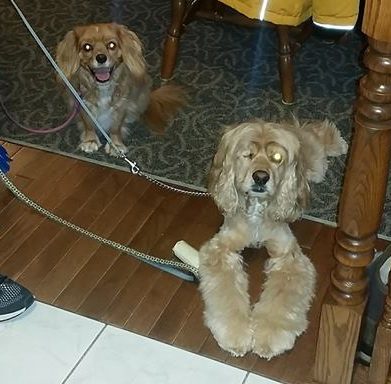 “Just wanted to  let  you know about the awesome walk we had today. Moxxie is doing good, we met two dogs on the sidewalk moved over as much as I could  but the other dogs were on long leashes the owner made no attempt  to pull them in. Moxxie let the other dog come right up to her and she didn’t  even freak out, we just kept walking. Later two dogs were barking at us though the fence, one bark and I gave her a little pull on the collar, she stopped just like that kept right walking. We also did some sitting on the bench down town, she sat down even before Dante.  Thanks  again for making me want to take my dog out in public  again.”

Another email from Marlene…

“I  actually  took  Moxxie into the pet store this morning . The last time I  took  her she was just crazy . I still  can’t  believe  how  good  she was this morning . She waited at the  door before we entered  then we did a walk around the store. No pulling or jumping on my legs just a nice calm walk around.”

Marlene with Moxxie in Grimsby